ADALAM is a research and innovation project of the PPP Factories of the Future, inside the biggest EU Research and Innovation programme, Horizon 2020.The main goal of ADALAM  is to develop an adaptive laser micromachining system, based on ultrashort pulsed laser ablation and a novel depth measurement sensor, together with advanced data analysis software and automated system calibration routines.

Unimetrik, part of Innovalia Metrology, is the project coordinator and together with CARSA and Datapixel are collaborating with other European institutions like Demcon, Focal, Fraunhofer IPT, Lumentum, Lightmotif, Sandvik, Sill and XYcarb Ceramics to make real ADALAM.

In addition to being the coordinator of the ADALAM project, UNIMETRIK w also in charge of the methodological characterization and evaluation of the complete measurement solution (sensor + machine kinematic) and its calibration and certification. This involve the complete characterization of the error sources and their effects in the machine and measuring processes and the development of specialized calibrating artefacts. DATAPIXEL participates in the development and implementation of an automated point cloud analysis software. The software is able, on the one hand, to detect defects of around 20µm in diameter on silicon wafer carriers and on the other hand detect complex shapes and geometries of a drill to accurately align the coordinate systems to allow for precision machining, while CARSA is focusing on defining a strategy for products commercialization.

The project consortium comprehends partners in every aspect of the development chain for execution of an adaptive ultrashort pulse laser micro manufacturing asset. The exploitation of project results and developments till now have been extremely strong.

The adaptive laser micromachining system has been used for a large variety of applications, each requiring a special adaptation of the control software. For this reason, the ADALAM system has been developed following a modular approach, enabling a straightforward development of future new applications.

Finalizing the project scope, the developed solution has been specifically optimized for three industrial end-user applications representing three different uses of the system:

-Adapting a micromachining process to defect detection and removal present on a workpiece.

-Guiding and adapting a laser machining texturing process adapting for deviations in shape and positioning of complex 3D tools. 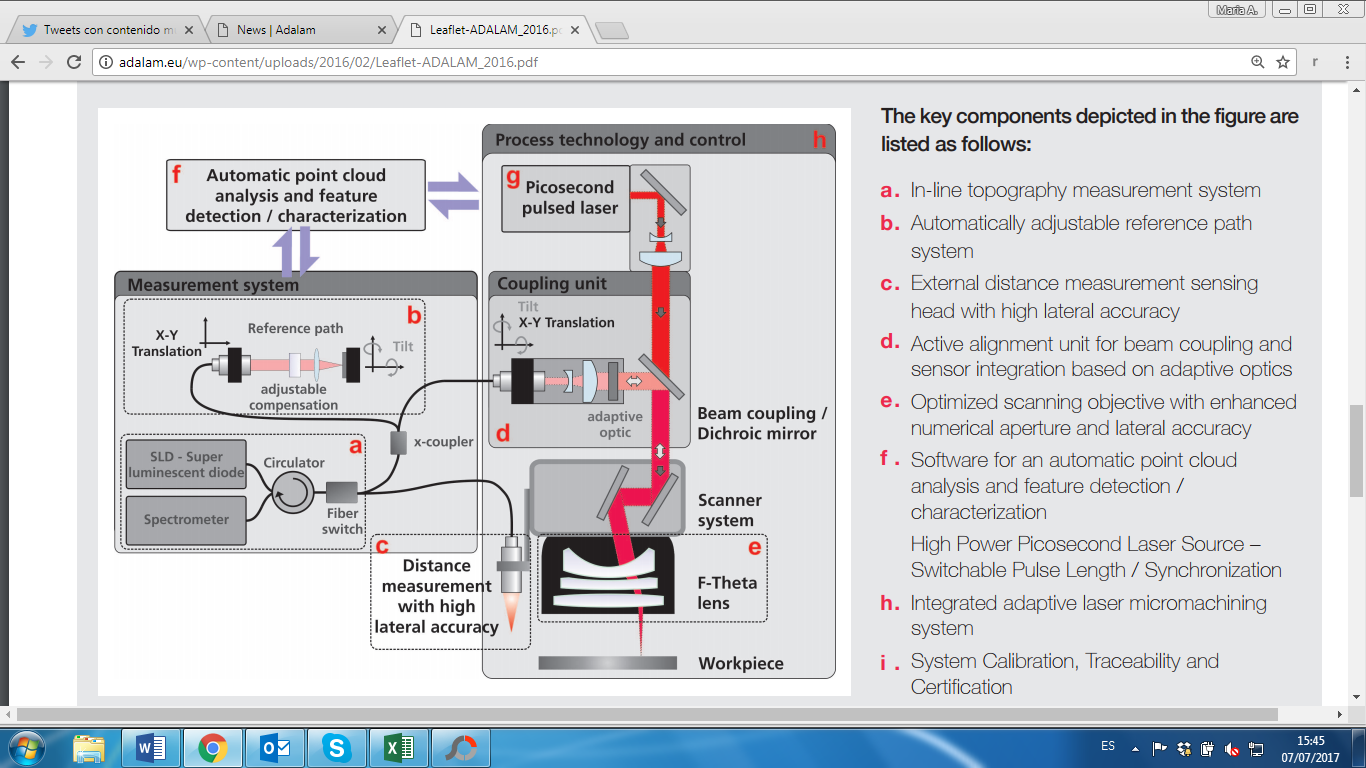 ADALAM is also providing convincing evidence to SMEs of the benefits of the use of adaptive ultrashort pulsed laser based manufacturing systems and its monitoring and control with in-line dimensional metrology as well as final quality assurance for a considerably enhancement of the exploitation and usage of material and resources and the consequent generation of high quality final products.

ADALAM demonstrates once again the commitment of Innovalia Group with the technological development and the excellent positioning of the Group on the European Research Area.

Innovalia Metrology systems and solutions are designed to provide our customers with a guarantee of measurement accuracy for parts and components that are vital to the manufacturing process, and to enable the achievement of higher levels of productivity and efficiency in production processes.